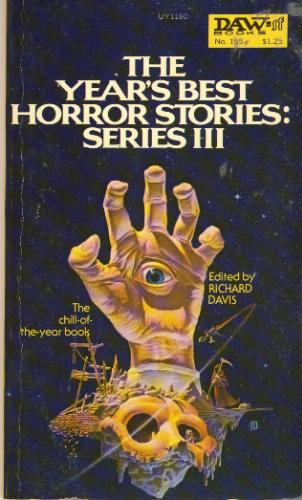 The story is about a weird fish-like being who means the doom of anyone who encounters it. A Lovecraftian pastiche which also is a kind of reflection on Cthulu Mythos fiction. By the way, I suggest anyone interested in weird fiction to read T. Kline "The Events at Poroth Farm. I'm not going to review every story here, so I'll just mentioned a few that made an impression. As I was reading this story late at night, I became more attuned to the sounds around me, that's how effective the story was for me.


In this story, a tour group has to take a pause, so one of the members of the tour group goes into an abandoned church. This church is creepy, it is dark, there are sounds, perhaps laughter, the paintings on the church walls are blasphemous, and there are dead bodies which apparently are moving toward this tourist. The story is about a she-werewolf which goes after men, and has an unexpected ending. The conflict in the story is between an attractive middle aged woman, and the new housekeeper she hired, an attractive young woman.

The housekeeper misinterprets the words and actions of her employer, causing an horrible end. A great collection, as always. I think my favorite part of reading these is seeing all the writers who I've never heard of, taken from obscure publications.

Klein's "Black Man With a Horn" : I didn't purchase this book because I wanted to read Lovecraftian inspired stuff--in fact, it was more so I could get a wider grasp of the genre's development--but if I should nominate a short story involving HPL superbly without in any way mimicking either him or the "Cthulhu Mythos" this is it! I won't go into details, but the pun to the HPL phenomena incl. And the, hm, un-ending of the ending is wonderful. Later: Okay yarn.

Not the worse, not the best. My main complaint, though, is that I don't find the "Elvis concert playlist" believable; not if you know how s Elvis arranged them--and since I got the impression that the impersonator in question is basing his show around that area's Elvis and not, say, they young one from the s that spoiled it for me. Late April: "On Call" by Dennis Etchison: A very nice, little tale of growing horror through the optics of estrangement and paranoia caused by weird changes in the protagonist's life--really happening everywhere around him.

And one wonders if not he's the real problem:- The advancing paranoia aspect with genuine horrific end notes, however, reaches a close-to-unparalleled sublimity in Ramsey Campbell's "The Gap". I rarely shudder, but the build-up of this story evolving around a writer's experiences following a visit from collegues and a weird friend of theirs really gave me the creeps--especially at the end.

The link for that episode is here. He wants to be a writer and sends obsessive fan letters to a "Stephen King"-like author he admires and projects on, but what happens when his idol actually visits him and proves to be more and less than he imagined? A very strange and, ultimately, intense, story - Etchison remains as inscrutable as ever, but I liked it. There are two standout stories in this collection, solidly excellent in every way. This is the kind of real-world horror one could argue it has to be a fantasy since it features politically committed campus protests in and we know that just didn't happen that, again, Wagner was adept at noticing and including in his yearly anthology, and we're all the better for it.

Finally, I experienced immense joy re-reading Stephen King 's masterful "Mrs. Todd's Shortcut", which is a fine piece of dark fantasy and immensely assured writing and which I now must solidly place in the top echelons of his short fiction. What's great about it is that King is not merely satisfied to tell an inventive weird tale of a impetuous and fiery woman's penchant for "making time" on the Maine backroads even if it takes her off the map entirely!

Truly, a masterpiece my favorite detail: the sign that says "Motorway B"! And that's it folks! View 2 comments.

Apr 27, Scott rated it really liked it Shelves: horror , short-stories. Schow alongside several less known authors. The only story I did not like at all was "Mrs. Todd's Shortcut," an ironic title since King always takes the long way round when telling a tale and this was no exception. The journey was dull; the destination not worth the time. Here are some that are better: "Are You Afraid of the Dark?

Grant: A trio of delinquents is forced to play a series of sinister games with their babysitter. Schow: A Vietnam vet discovers the truth lurking under the skin of a run-down movie theater. More a suspense tale than a horror, but with a great punch at the end. Oct 10, Kevin Lucia rated it it was amazing. One of the things I love doing with these collections is reading all the bios. 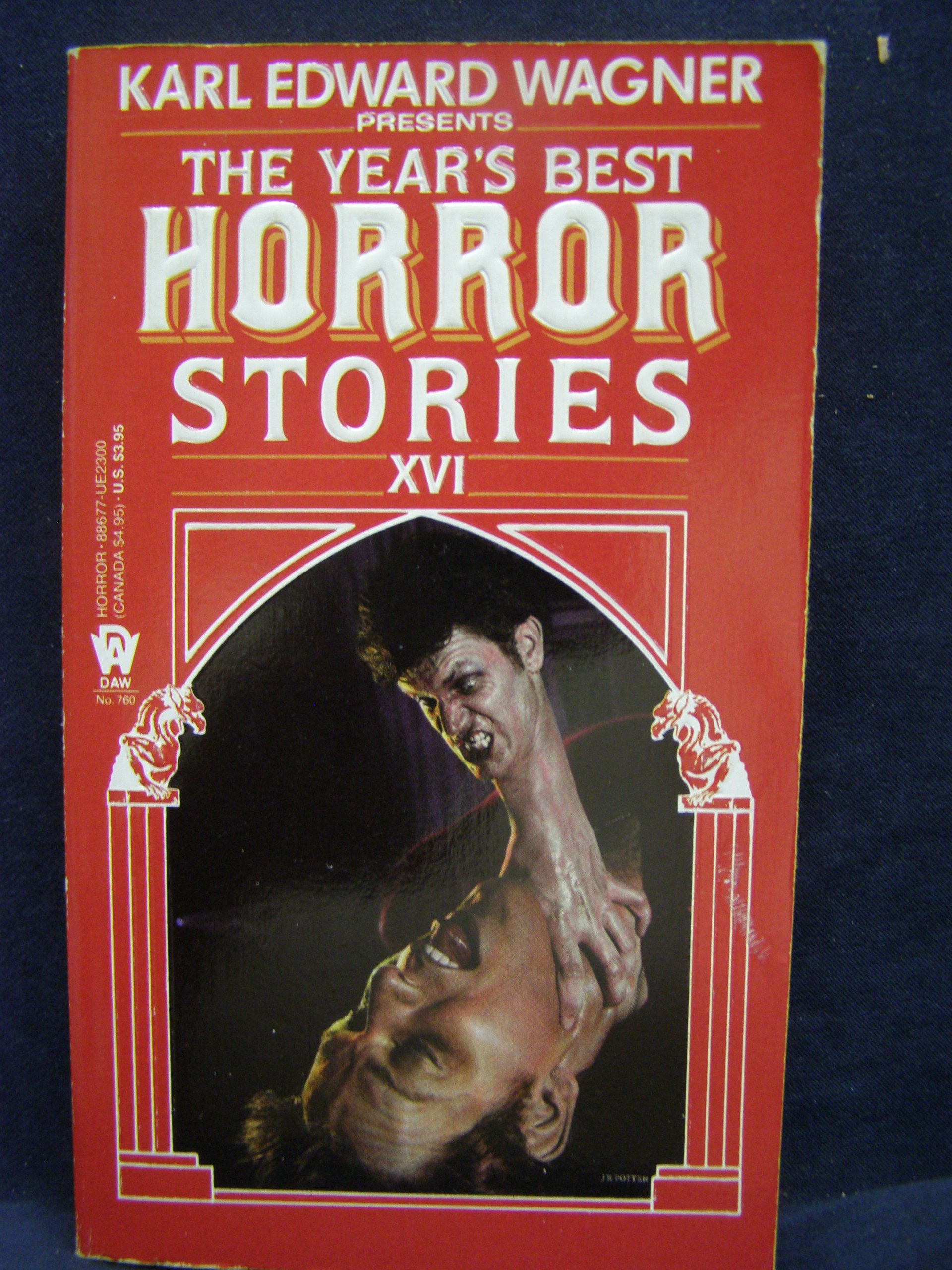 It's amazing to see writers now considered to be greats cutting their teeth, but also just as humbling to read wonderful stories by writers I've never heard of before, who, for some reason or other, faded off the scene. Humbling, and gives perspective. That, and of course, the stories rock. Dec 16, Ronald rated it really liked it Shelves: horror-fiction , weird-fiction. I got this one from the public library. This book was published in , which contains editor Karl Edward Wagner's choice of the best horror short fiction of Comments on some of the stories: "Mrs.

Todd's Shortcut" by Stephen King. Karl Edward Wagner, in his introduction to this story, says "For those who assume anything written by Stephen King is automatically published, three women's magazines rejected this story before Redbook accepted it. The first person narrator communicates in a dialect of the English language, which, for me, reduces ease of reading. I used to interact with Gardner Dozois on the Asimov's forum, before its demise.

Some might feel that the demise of the Asimov's forum is a horror story itself. The background is tension between the Federal Government and some states; yes, a second Civil War is looming. In this background a Senator, who is pro-Union , might have wished he not made a certain promise. A child is travelling back home, in the cold and the snow, and wonders if he is seeing a real tiger near him, or if just mistaken.

Interesting idea in this story, and after reading the first half, I had no good idea where it was going to lead, which is good thing. A man writes a long letter, revealing a lot of personal info, to a horror writer he likes. The fan of the horror writer, and the horror writer meet up. A bit of advice sometimes given to writers is "Write what you know.

Apr 16, Pam Baddeley rated it really liked it Shelves: supernatural , horror. One in a long running series, this was published in to showcase the best stories of Not all are what I would catagorise as horror: for example, Mrs Todd's Shortcut by Stephen King is about ageing, loss, new beginnings and other dimensions, and would perhaps fit better in a fantasy collection, which is not to minimise its impact as a great story.

Tiger in the Snow by Daniel Wynn Barber is a poignant story of a young boy's last hours, while The Thing in the Bedroom by David Langford is a tongue in cheek story which makes fun of the cliches of the genre.

Call For Submissions -THE BEST HORROR OF THE YEAR volume Eleven

The End of the World by James B Hemesath, set in a remote part of the USA that is suffering a long drought, is another story of the horrific crimes human beings perpetrate against each other. Never Grow Up , one of two stories by John Gordon in this volume, is also in this vein and takes the form of a young boy telling the story of his life with his parents to the grave of a long-dead girl.


Talking in the Dark by Dennis Etchison is a rather nasty story where a reclusive and socially awkward fan gets the chance to meet the author whose work he idolises. The other stories in the collection are fairly standard supernatural revenge type tales, but for the standout stories that don't fit a formula, the collection merits 4 stars.

Jun 01, Taueret rated it really liked it Shelves: have , horror , short-stories. Loving these anthologies. Have never been able to match the cover art to the story- this volume or any other Jun 29, Sylvie marked it as to-read Shelves: gothic-horror. Barber wrote the excellent story called The Tiger in the Snow.